Early in 2014, in an effort to reduce nitrogen loading to the Indian River Lagoon (IRL), the Brevard County Department of Natural Resources met with the engineers at EcoSense International (ESI) to discuss improvements to Phase 2 of their Micco/Little Hollywood BMP Project.  Phase 1 of the project involved installation of a stormwater infiltration system and a large denitrification wall positioned to intercept flows from both groundwater and the infiltration pipe.

Portion of final Phase 2 plan provided by DRMP. Moderate flows from (S-1) EcoVault® are weir diverted offline at EX-4 to (S-2) EcoVault-DN™. Discharge from EcoVault-DN™ rejoins the main line at S-2A. High flows are allowed to bypass. The system discharges to the Sebastian River, a tributary to the IRL.

Phase 2 plans originally called for drainage structures and piping upgrades, plus the installation of a Second Generation Baffle Box with media filter, but the County wanted an innovative solution focused on greater Total Nitrogen removal.  Several months of research for efficient carbon sources and even isolation of native denitrifying bacteria led to the development of the EcoVault-DN™.

Brevard County opted to specify several different products from ESI for the project: An EcoVault® with Vault-Ox® would treat the entire flow while pretreating flows to the EcoVault-DN™. The proprietary media inside the   EcoVault-DN™ provides a two-stage carbon source, with an enriched, very large surface area biofilm substrate for denitrification.  The media also incorporates a highly effective filter for phosphorus removal. 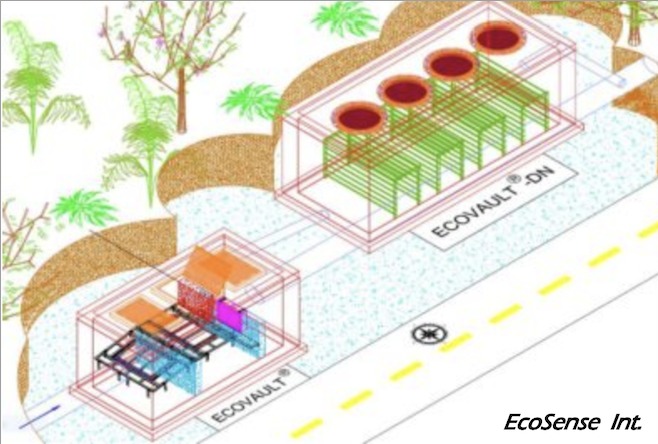 A computer generated image produced by ESI to illustrate how the EcoVault-DN™ would be utilized in the Micco/Little Hollywood SW BMP Project.

JoBear Contracting, Inc. won the general contracting bid for the project. Their project manager opted to subcontract both structures from ESI, as they had already consulted with Brevard County about the specific technology that should be used in this situation. 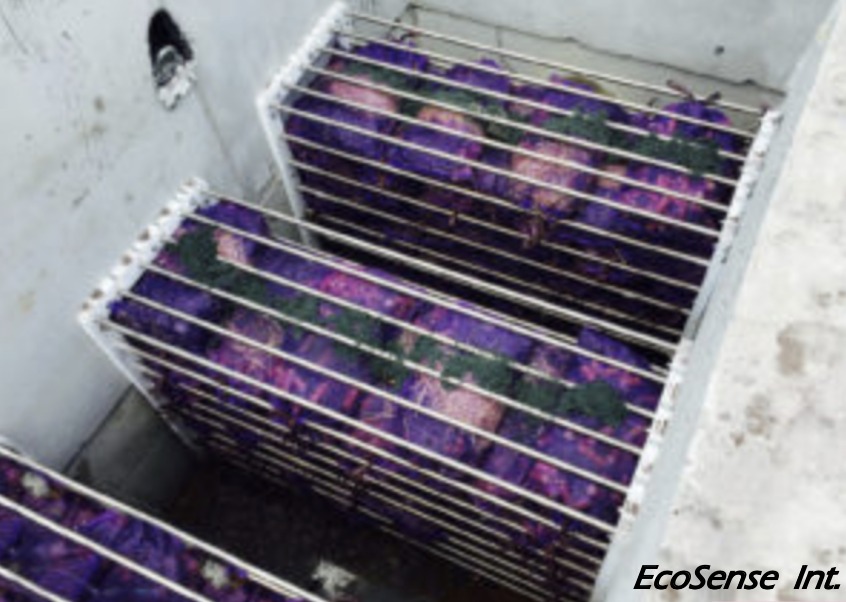 The whole project was completed in two phases. On the first day, the completed EcoVault® and the main structure of the EcoVault-DN™ were set in the ground and connected to the in-and-outflow piping. On the second day, the ESI field staff installed the internal components and media into the EcoVault-DN™.

The Brevard County Department of Natural Resources oversaw the entire installation and was very satisfied with the final products. Testing of the discharge water will be handled by the County and will begin in about 6 months. Both ESI and the County are optimistic about the removal rates that the EcoVault-DN™ will be able to produce. “If the final results are as good as what our preliminary tests have shown, we expect to see a high demand for the EcoVault-DN™, as nitrogen and phosphorous have become a major concern in groundwater here in Florida,” said Randy Burden, VP of Engineering at ESI.

ESI expects to have results to report by December of this year. Please visit our product page for more information about the EcoVault-DN™.