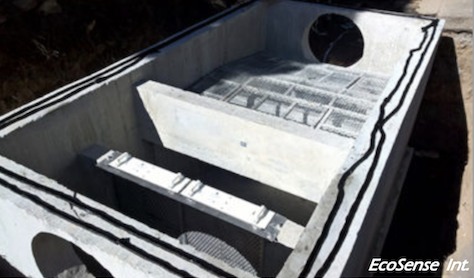 The Big Pine Drive North EcoVault™ is seen here, shortly after being set in the ground, awaiting the installation of the top slab.

After nearly two decades of growth and expansion throughout Florida and the Southeast, EcoSense International (ESI) made their first trip out west earlier this month, to oversee the manufacturing and installation of their first two baffle boxes in the Lake Tahoe area of Northern California. ESI, an industry leader in stormwater remediation, sold two of their Second Generation Baffle Boxes, which they call EcoVaults™, to Placer County, which will be a focal point of the West Sunnyside Water Quality Improvement Project – Phase 2. These water quality structures will be used to treat the stormwater runoff from the surrounding areas before it reaches an infiltration structure on the edge of Lake Tahoe. The overall goal of the project is to increase water quality before it reaches the lake and also help with erosion control. EcoSense International partnered with West Coast Contractors of Nevada (WCC), the contractor who won the bid for the entire project.

Competing against ESI, was Contech, who manufactures the CDS Hydrodynamic Separator. They have a well-established grasp on the stormwater treatment industry throughout California. When asked by ESI why the contractor chose to go with the EcoVault™, Corey Green, the West Sunnyside Project Manager for WCC said, “Although I had no knowledge of EcoSense, the cost of the EcoVault™ was 25% less than the other options. This cost savings were valuable to the overall project.” This decision was aided by a report conducted by the Florida Department of Environmental Protection. While being tested against other water quality structures such as the CDS Unit by Contech and the NSBB by Suntree Technologies, the EcoVault™ markedly outperformed the comparable structures. The report stated, “…the EcoVault™ baffle box system appears to provide a substantial improvement to the standard baffle box design…”.1 Along with favorable nutrient removal numbers, the EcoVault™ offers costs savings in the form of ease of installation and maintenance.

The California Tahoe Conservancy and the United States Forest Service have been working diligently over the past several years to fund projects to improve water quality in the areas surrounding Lake Tahoe. Phase 1 of this project saw the improvement of rock lined channels, extensive revegetation, and the resizing of drains and culverts. Phase 2 saw further culvert replacement, along with the installation of the aforementioned water quality structures. It is yet to be known if there will be a 3rd Phase. EcoSense International looks to leverage any further projects to continue its expansion into California and the surrounding states.