Best Bang for Your Old Bucks

In 2014, the Brevard County Department of Natural Resources began working on a proposal to upgrade old baffle boxes throughout the county. As Brevard County already has numerous Type I Baffle Boxes in place, it made fiscal sense to come up with a plan to upgrade the existing structures to the now standard, Type II Baffle Boxes. JoBear Contracting, Inc. won the bid for the entire project, and partnered with EcoSense International, Inc. (ESI) to design the upgrade components. The project began in July and was wrapped up by mid-September without any complications. 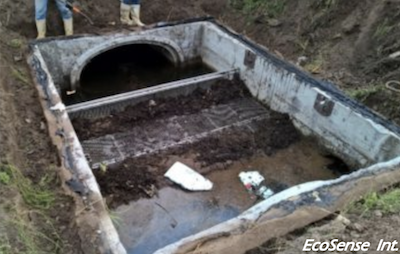 A retrofitted baffle box on Haverhill Dr. In Cocoa, FL is being prepared to receive its new top slab.

Brevard County began installing Type I Baffle Boxes of their own design back in 1993.  These structures were originally designed to capture suspended solids in stormwater runoff, but were not effective at removing nutrients such as Total Phosphorous (TP) and Total Nitrogen (TN). In fact, the Florida Department of Environmental Protection (FDEP) awards these older style baffle boxes minimal TMDL credits, 0.50% TP and 2.3% TN. According to the Baffle Box Effectiveness and Monitoring Report1, the Type II Baffle Boxes (like the standard EcoVault™) receive much higher removal credits because of their higher nutrient removal efficiencies (19.05% for TN and 15.50 for TP).

Funded by an EPA 319 grant, a total of seventeen Type I Baffle Boxes were upgraded to Type II.  Seven of the structures received new top slabs, complete with large aluminum access hatches.  The total cost of the project was approximately $330,000, a small fraction of the cost of new construction. Brevard County has already decided to start a second upgrade very soon.